Cannot connect to Photoshop in Windows

As your first point of action, please re-start your computer.

If the issue is still not resolved, and you can't connect to Photoshop or get the message "Failed to run Photoshop script" when running custom actions or high-res production then check these solutions.

Note: You need to have Photoshop version CS5 or newer to work with ProSelect. See the bottom of this article for the latest information about CS6 and CC installations.

Checking if ProSelect can connect to Photoshop

If you are not sure whether ProSelect is having a problem connecting to Photoshop then you can do the following:

In this case, you should be able to use commands (Ctrl-T) to like Open Original file in Photoshop.

If the above test does not work as described then check the solutions in the sections below.

If the test works but you still have a problem when running Hi-Res Production, then you should check the Debugging Production Problems article.

Then re-test the connection again. It should launch the version of Photoshop that you have selected and show this version in the confirmation window.

Make sure Photoshop is not waiting for user input

Switch over to Photoshop and make sure that Photoshop is not displaying any Dialog boxes or windows . These may occur be for a number of reasons including an error while starting Photoshop, activation, registration, new update message or its Welcome window (see below). When these messages are being displayed, generally Photoshop will ignore any commands coming from ProSelect and ProSelect will be left waiting for a response.

If you have been recently using Photoshop, make sure that you haven't left it waiting for confirmation to complete a text edit, transform operation etc. This is easy to miss (particularly with C6 and newer with black backgrounds). You should NOT see the buttons below at the top of the screen - if you do click one button or the other to clear this state. Photoshop will not respond to external commands while these buttons are shown.

Getting rid of the Welcome window in CC 2014 on startup

You can only stop the Welcome window from being shown when Photoshop starts if you are using a registered version of Photoshop CC2014 (not the trial version). To do this click on the What's New tab in the window then scroll all the way down to the bottom. There's a check box "Don't Show Welcome Screen Again".

This window is shown, by default, over the top of your work area when opening CC 2015 and will prevent ProSelect from sending commands to Photoshop. To prevent this open Photoshop's Preferences, select the General section on the left and uncheck the boxes next to both:

The close and re-open CC 2015 to verify that this screen is no longer shown.

One user reported that he needed to "Run ProSelect as Admin" on Windows 10 in order to successfully connect to Photoshop. This may have been due to his particular security settings but it did provide a solution.

He also reported that running ProSelect in "Windows 7 compatibility mode" prevented ProSelect from connecting to Photoshop (even when running as admin).

When you install a new version, the Photoshop installer should update the registry entries that ProSelect uses to locate it. However, sometimes this does not get completed correctly.

In this case, the best option is to uninstall all copies of Photoshop then just re-installing the latest version should fix this. Alternatively, you can manually adjust the registry entries yourself (see next section).

This also applies to installing both the 32 and 64 bit versions of Photoshop. It is recommended that you only install the 32 bit version or the 64bit version, but not both, to avoid registry entry problems. (See section below about 32 bit vs 64 bit versions).

If you need to have more that one version of Photoshop installed see the next section.

Selecting which version of Photoshop to use (ProSelect 2015r2 and newer)

By default, this is the latest version as determined Window’s current Registry entry setting for “Photoshop.Application”.  However, you can also select a specific version of Photoshop from the dropdown menu. 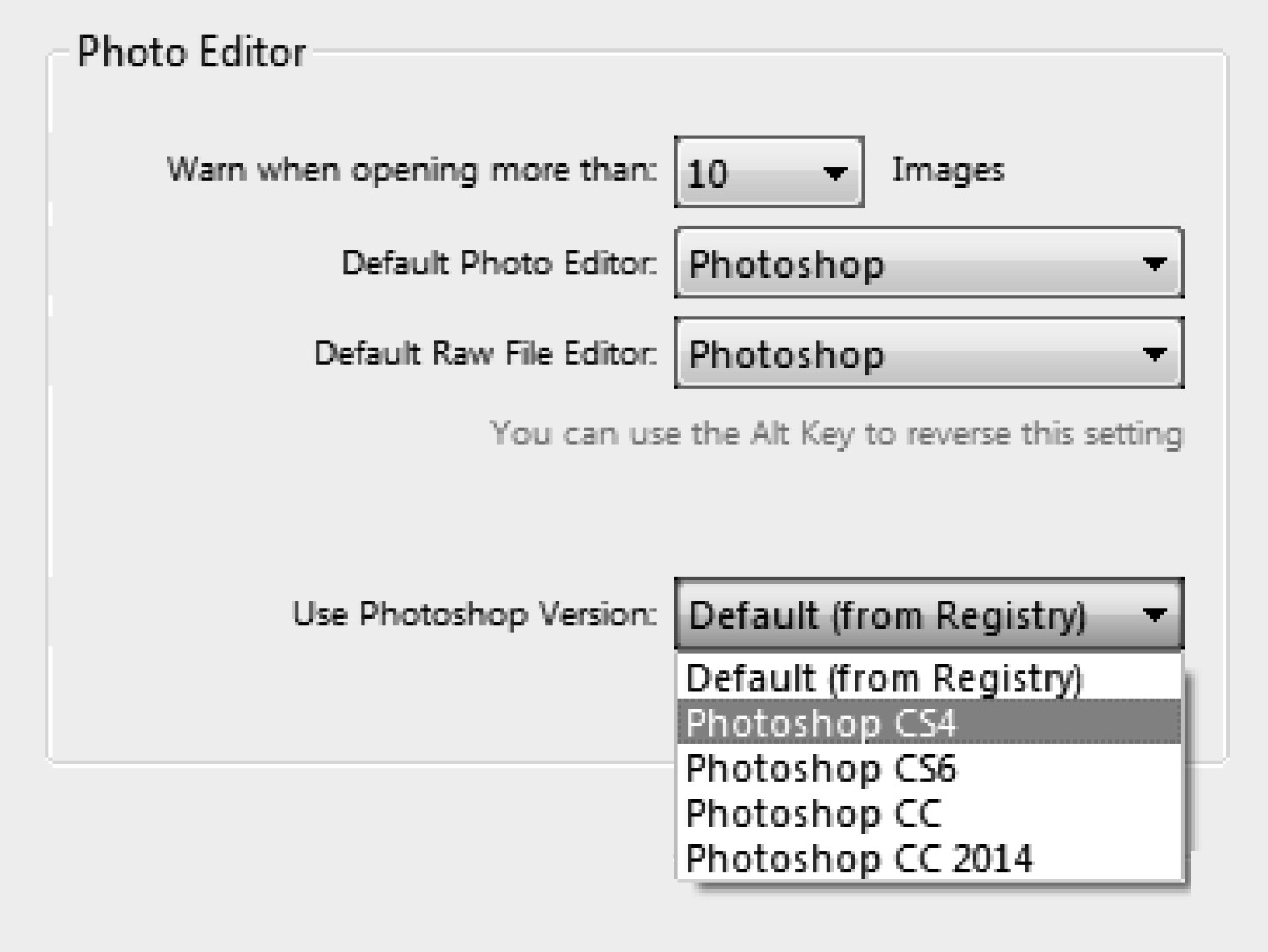 Not a Perfect Solution

If you do have a different version running, then ProSelect will try to launch the selected version but Photoshop itself will cancel the launch because another version of Photoshop is already running. As a result, the command from ProSelect will stall until it times out (after about 30 seconds) and you will get a  "Failed to run Photoshop script" message.

If selecting the version of Photoshop to be used in ProSelect does not work as expected, then likely your computer's registry entries for Photoshop are incorrectly setup (this has been reported for some CS6 and CC installations by a few users). In this case, you will need to follow the instructions detailed below to manually adjust your registry entries. When completed, you should set the Preferences to "Use Photoshop Version: Default (from Registry)".

Checking that the Registry Entry for Photoshop is correct

ProSelect connects to Photoshop by calling the OLEObject in the Windows Registry called "Photoshop.Application".

When you install Photoshop, this value is set to point to the latest installation of Photoshop however, this setting can get confused when upgrading Photoshop versions or if you have multiple copies of Photoshop installed on your computer.

For ProSelect to be able to connect to Photoshop the CLSID registry setting for "Photoshop.Application" must point to a valid copy of Photoshop.

The Registry will usually also have a specific entry for each version of Photoshop that you are running as follows:

CS6 has a registry entry called "Photoshop.Application.60" (See section below about 32 bit vs 64 bit versions)

CC has a registry entry called "Photoshop.Application.70" (See section below about 32 bit vs 64 bit versions)

To do this you need to open and use the Windows Registry Editor as described in the next section.

If you do not want to make this registry change then you should uninstall all copies of Photoshop on your computer and then only re-install the latest version of Photoshop that you have. This will normally fix any registry problems.

One user reported that the "Registry Repair" function in this software removed all the Photoshop CLSID folders from the Registry preventing ProSelect from connecting to Photoshop. Fortunately, he had a backup copy of the Registry before the cleanup. After restoring the Registry from this backup everything worked again!

If not done correctly, editing the registry can stop your computer from working! If you are not sure what you are doing then get an expert to help you.

On XP, click Start, Run and type "regedit" in the Open box and click OK.
On Vista or Windows 7, click on the Start Orb (Button), click in the Start Search Dialog Box, type "regedit", press enter

2. Click on the HKEY_CLASSES_ROOT folder to see the contents.

3. Scroll down until you see "Photoshop.Application" and open that folder.

4. Click on the CLSID folder and make a note of the value under the Data heading in the right-hand pane as shown above. 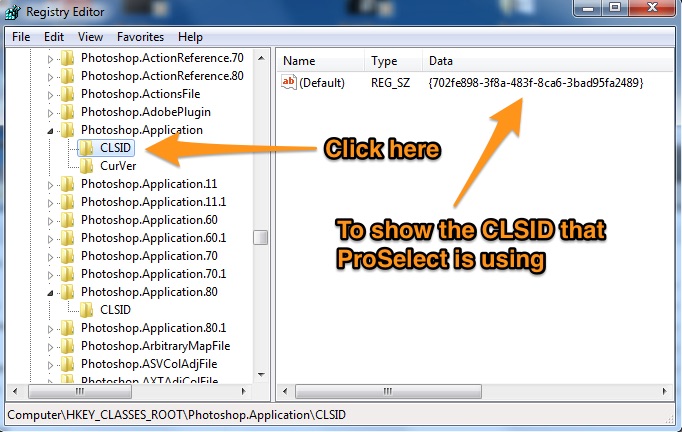 5. Now scroll down the left-hand list until you see the registry entry for the version of Photoshop that you wish ProSelect to work with.  As mentioned in the previous section CC 2014 would be "Photoshop.Application.80".  Important: You should only choose a version of Photoshop that you know is installed AND working on your computer as there may be registry entries still left over from previously installed versions of Photoshop.

6. Click on the CLSID folder and check the value under the Data heading on the right-hand pane. 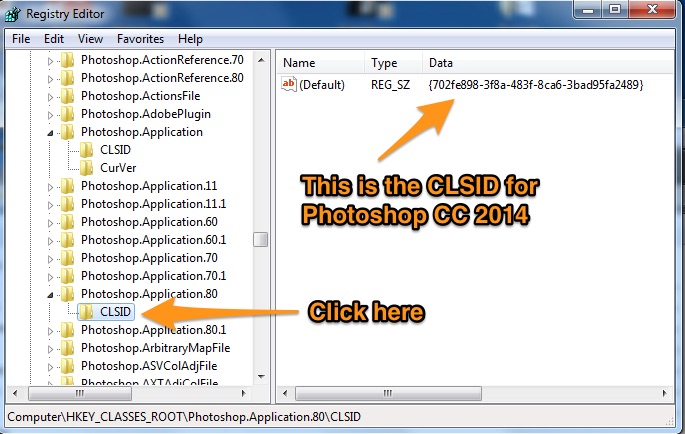 The number shown should be the same as the number from step 4 above. If it is not, then follow the steps below.

7. Double click on the icon under "name" in the right-hand panel to open the "Edit String" dialog. Select and copy (using Control-C) the ID number in the Value Data box.

9. Scroll back to the "Photoshop.Application" and open that folder (same as step 4)

10. Double click on the icon under "name" in the right-hand panel to open the "Edit String" dialog.

11. Select the ID number and use paste (using Control-V) to replace the number in the Value data box

12. Click OK to save the value and close the box.

Versions of Photoshop from CS6 onwards allow you to install either the 32bit version or the 64bit version of the software.

With CS6:  It is recommended that you do not install both 32bit and 64bit versions of the same version of Photoshop at the same time, otherwise, you can't predict which version ProSelect will use. If you have done this then you will need to un-install both versions and then re-install the one that you wish to use or get an expert to poke around in your registry entries further!

With CC: Unfortunately, it appears that you have no choice other than to have both 32 and 64 bit versions of Photoshop installed. The CC installer also sets up the Windows Registry Redirector so that the 32bit of Photoshop is always used when the called from a 32 bit application (which ProSelect currently is).  The redirector is controlled from this registry key:

It is possible to delete this key and the 64bit version seems to run when invoked from ProSelect, however, this change this MAY effect other applications that connect to Photoshop so you should backup your registry so it can be restored in the event of other problems occurring.  At this point in time, without this registry change,  you will need to only use the 32bit version of Photoshop with ProSelect.

With CC 2014, CC2015:  It appears that these versions automatically installs either the 32bit or 64bit version depending on whether your version of Windows is 32bit or 64 bit. So if you are running Windows 7 (64bit) then Photoshop CC 2014 x64 will be installed. You can check this by looking at the version number in the About Photoshop window. In this case, ProSelect will run the installed version assuming that the Registry entries are correct.

Following a recent report from a user, it appears that when you install CC 2014, CC is not removed and the resulting registry entries that ProSelect uses may not be correctly updated to point to CC 2014 instead of CC

In order to allow ProSelect to connect to CC 2014, the solution was to:

It is likely that this last operation correctly updated the registry entries. Otherwise, you can manually check and, if necessary, update the registry entries using the method described above.  The same solution may be useful (we have not checked this) if you have problems installing the CC 2015 version after CC.

In most cases, ProSelect communicates with Photoshop by telling it to run a script file. Sometimes, a fault in Photoshop can prevent it from running these files at all. To check this:

If this you don't see the above message, then you definitely have a problem with your Photoshop installation. (Also see "Using Photoshop CC 2017" below). You could try uninstalling and re-installing Photoshop. If these tests still do not work, then we recommend that you contact Adobe for support.

After trying all the above options without success, we suggest that you uninstalling and re-installing Photoshop.

It is possible that third-party plug-ins may cause issues with the connection to Photoshop so we have included this information on testing Photoshop with plugins disabled below.

Cookies are very small text files that are stored on your computer when you visit some websites.